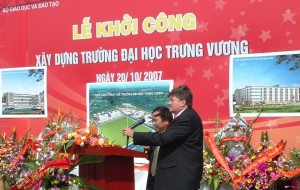 The European Academy of Applied Sciences was founded in April 2008 after a take-over of the previous German- Vietnam Academy Ltd. which was incorporated in 2005. The purpose of this predecessor company was to provide logistic and supervision services for universities of the federal state Baden-Wuerttemberg as supporting organization in Vietnam, especially in cooperation with the vietnam National University in Ho Chi minh City. In the course of time the network of participating universities is growing and the cooperation partners are extending over national borders: Hence the renaming in “European Academy” (short: EUACAD) was reasonable. As a partner of Trung Vuong University the European Academy Asia is now located on the international campus and as independent affiliate in Lauterstein near by Stuttgart. Dipl.- Ing Dang Quoc Hung and Prof. Winfried Hüttl are managing partners.

Prof. Huettl (right) with rectors from the Universities Nuertingen and Heilbronn, behind in the midst Minister Prof. Frankenberg (Federal State of Baden Wuerttemberg, Germany) 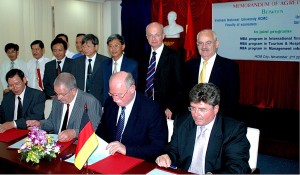